THE TWENTY-EIGHTH edition of the RICS Cyprus Property Price Index reports that the average price of residential apartments and houses across the island rose by 0.9% and 0.6% respectively during the third quarter of 2016. During the third quarter of 2016 the Cyprus economy showed further signs of stability, with the economy’s performance being better than expected and tourism mildly outperforming forecasts. Unemployment remained at relatively high levels, on a downtrend to ca 13% (from the high levels of 17%). Given prevailing economic conditions and the turbulence in the Cyprus banking system, there were relatively few transactions during the quarter although volume was higher on a year on year basis. Local buyers in particular were the most discerning as unemployment and high debt for locals maintained lack of interest. Furthermore, those interested are trying to access bank-finance. Property prices The Cyprus Property Price Index has recorded increases in almost all cities and asset classes, with significant increases being recorded in Larnaca area, whilst other cities are progressively bottoming out. Limassol recorded the largest quarterly increase in apartment prices (1.4%), while the largest rise in house prices (1.77%) was recorded in Paphos. The values of holiday homes rose 1.6% for apartments and 0.4% for houses. 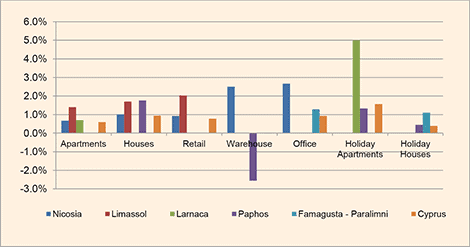 Compared to the third quarter of 2015, apartment prices have risen 0.6%, house prices have risen 0.9%. Prices for offices and retail have risen 0.9% and 0.8% respectively, while warehouses have remained stable. Since RICS (Cyprus) launched its property price index in the fourth quarter of 2009, the value of residential apartments has fallen by 39%, while the value of residential houses has fallen by 28%. (Anecdotal evidence suggests that the value of holiday properties has fallen considerably more than those of residential properties.) Rental values Across Cyprus, on a quarterly basis rental values increased by 0.7% for apartments, 3.3% for houses, 2.2% for retail, 1.1% for office and 3.5% for warehouses. Compared to the third quarter of 2015, apartment rental values have risen 5.3%, house rental values have risen 6.7%. Rental values for retail, offices and warehouses are up 3.9%l, 3.5% and 2.5% respectively. The majority of asset classes and geographies are bottoming out and are showing some signs of price stability. Gross yields At the end of the third quarter of 2016, average gross yields stood at 4% for apartments, 2.0% for houses, 5.4% for retail, 4.4% for warehouses, and 4.5% for offices. The parallel reduction and/or stabilisation in capital values and rents is keeping investment yields relatively stable and at low levels (compared to yields overseas). This suggests that there is still room for some re-pricing of capital values to take place, especially for properties in secondary locations.