The area plan and the process of moving petroleum installations were presented .... 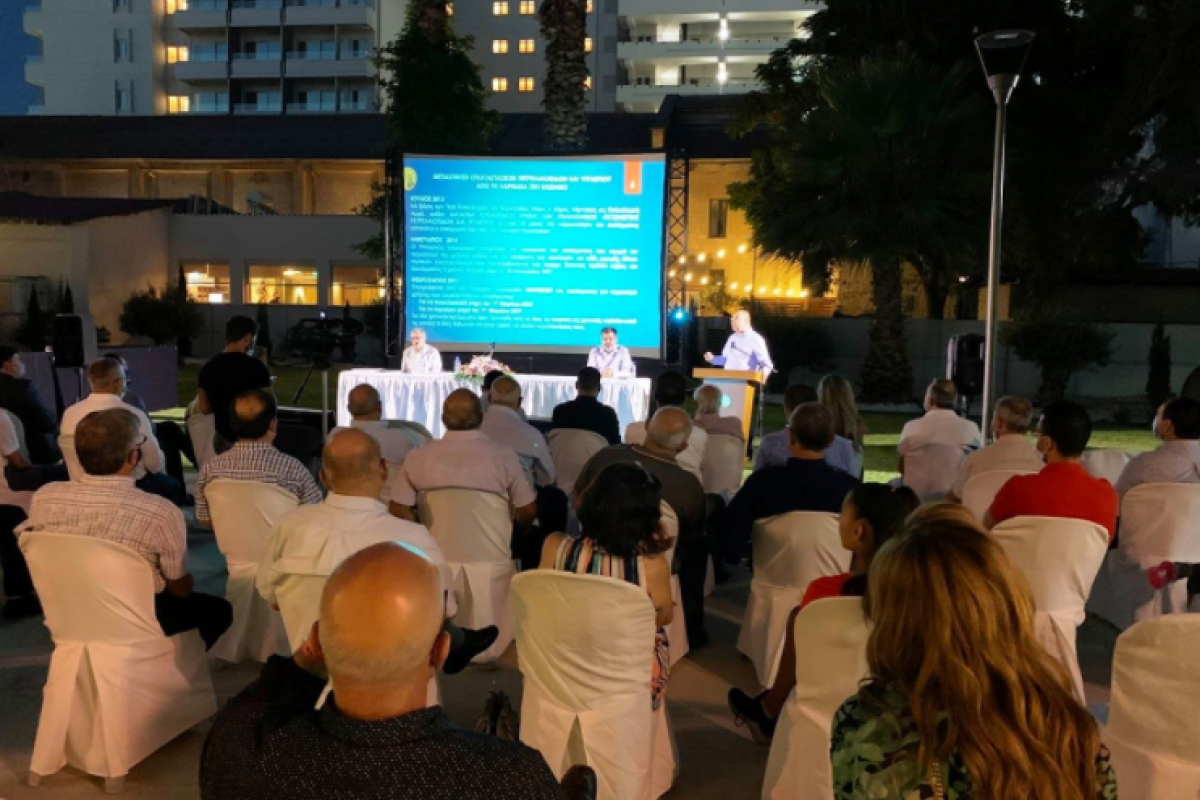 The area plan and the process of moving petroleum installations were presented ....

It took place on Friday, July 9, 2021, at 8.00 p.m. in the recently restored building of the Complex of Creativity and Culture (Former Larnaca Club), the presentation of the process of moving the oil and gas facilities from the coastal front of Larnaca to Vasiliko and the Regional Plan.
The presentation was open to the public and was attended by the Speaker of the House of Representatives Mrs. Annita Dimitriou who welcomed the event, MPs Larnaca Famagusta, Provincial Representatives of Parliamentary Parties, Members of the Municipal Council of Larnaca and Livadia and representatives of Bodies and Services. On behalf of the Minister of Energy, Trade and Industry, the General Director of the Ministry, Mr. Marios Panagi, attended and also welcomed the event.
The presentation of the relocation process that was followed all these years, was made by the Mayor of Larnaca Mr. Andreas Vyras, who referred in detail to the history and the actions that were coordinated by both the Larnaca Municipal Council and other competent bodies of the city. 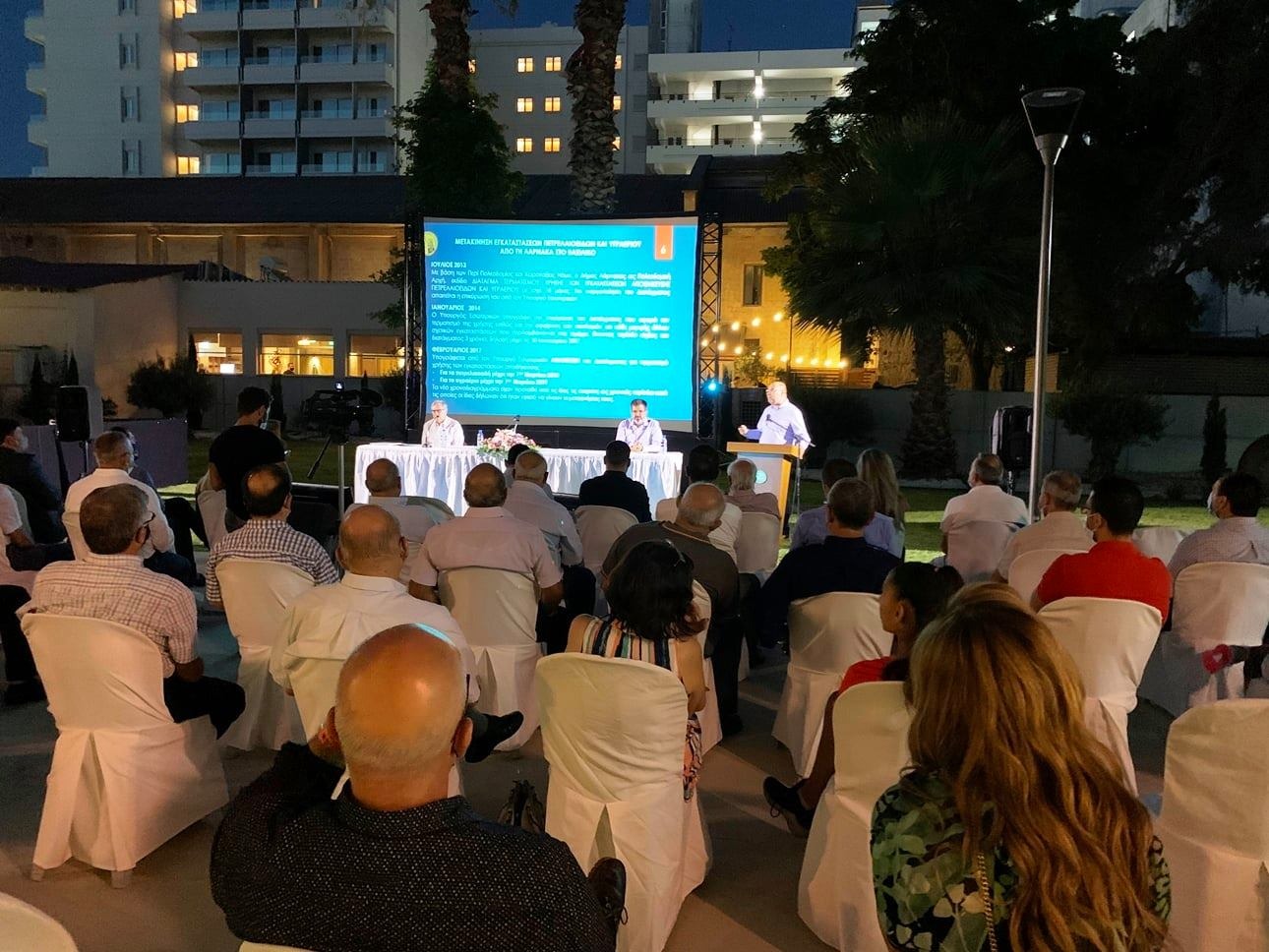 The Mayor of Larnaca, after mentioning what has been achieved so far with the works of all the Oil Companies having been terminated and transferring their operation to Vasiliko, noted that the area of the facilities has now been declassified by the SEVEZO directive. Regarding the asphalt storage facilities in the area of the former Refineries, he stated that on June 30, 2021 all the works have been completed and KETAP informed that the process of cleaning the tanks from the asphalt residues has started. At the same time, it has proceeded with announcing bids and finding a contractor for the demolition of the tanks that remain on the site. 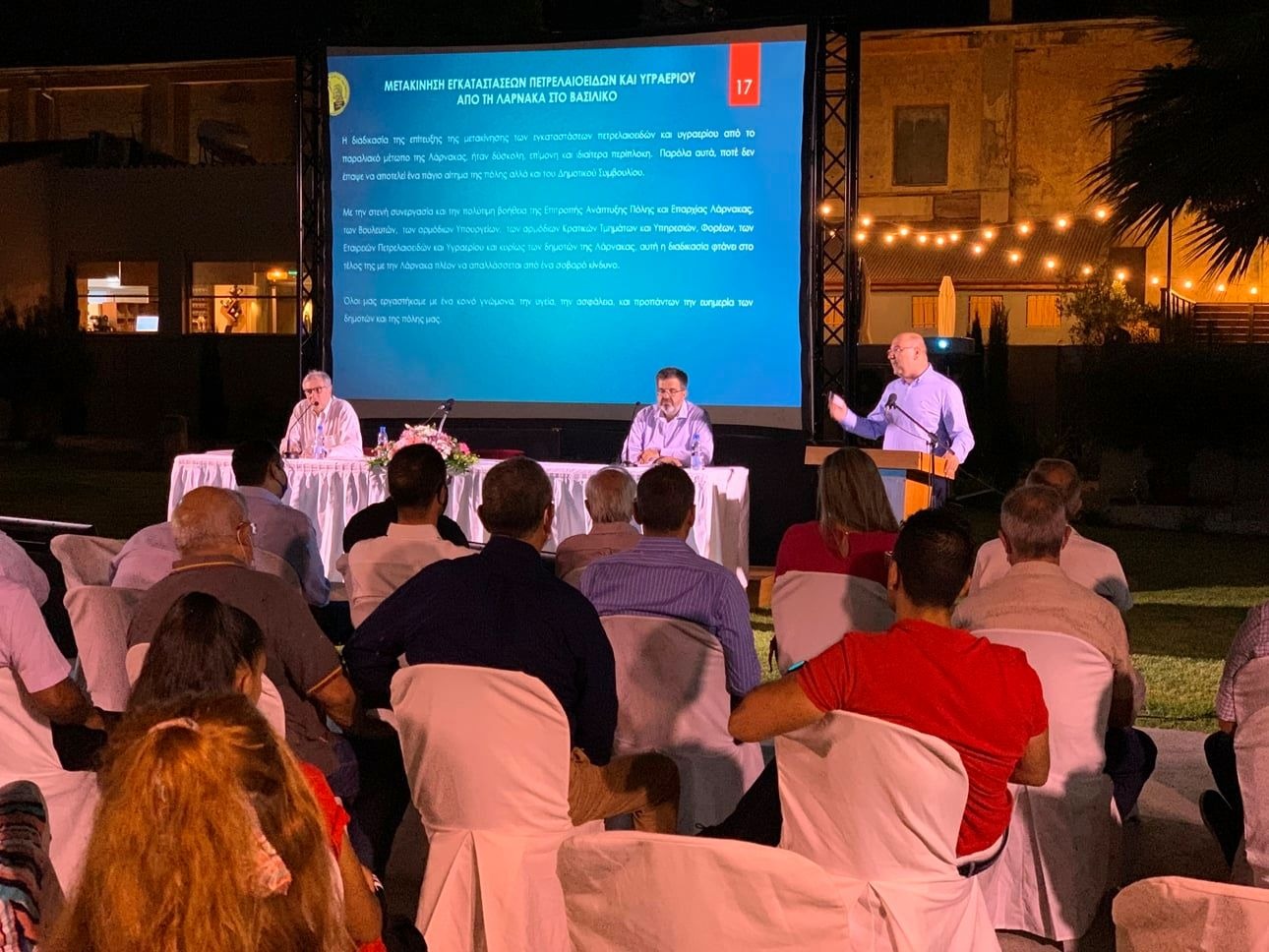 Regarding liquid fuels and the facilities of EXHON MOBIL, despite securing the relevant permits for demolition of the facilities, the company informed the Municipality that due to technical issues related to firefighting, the demolition of its facilities will begin immediately after the shutdown of LPG facilities and KETAP facilities in the area. Petrolina Holdings Group has purchased the land owned by EXXON MOBIL and the Group has assured that the demolition process will be completed by the end of this year. 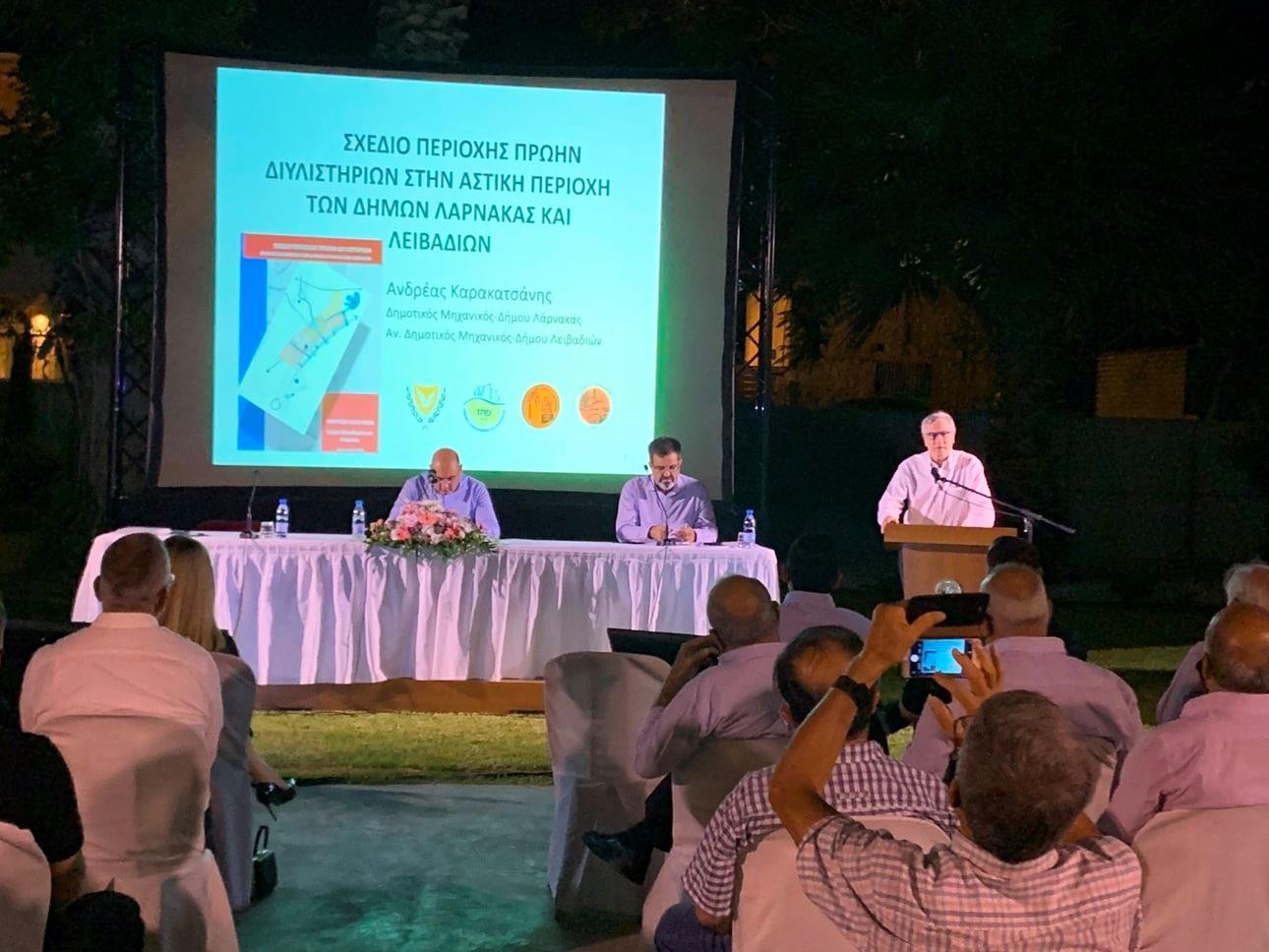 Regarding the gas installations, he stated that the VLPG Consortium (Petrolina, Intergaz, Synergas) and Hellenic Petroleum are operating separately. According to the Memorandum of Understanding signed between the Companies and the Government, the relocation of the LPG facilities from Larnaca to Vasiliko should have been completed by December 31, 2020. Recognizing the delays that occurred during the licensing and pandemic stage, the delay in the complete relocation of the facilities from the Larnaca coastal front was inevitable. However, a solution has been found to the serious problem of LPG unloading with the acceptance by the Cyprus Ports Authority and the State Departments as a temporary solution the unloading of LPG from Vassilikos Port with specific equipment and with all the necessary protection and security measures. The solution of this problem by the Port Authority, essentially helped to overcome the last major obstacle to the transportation of LPG. 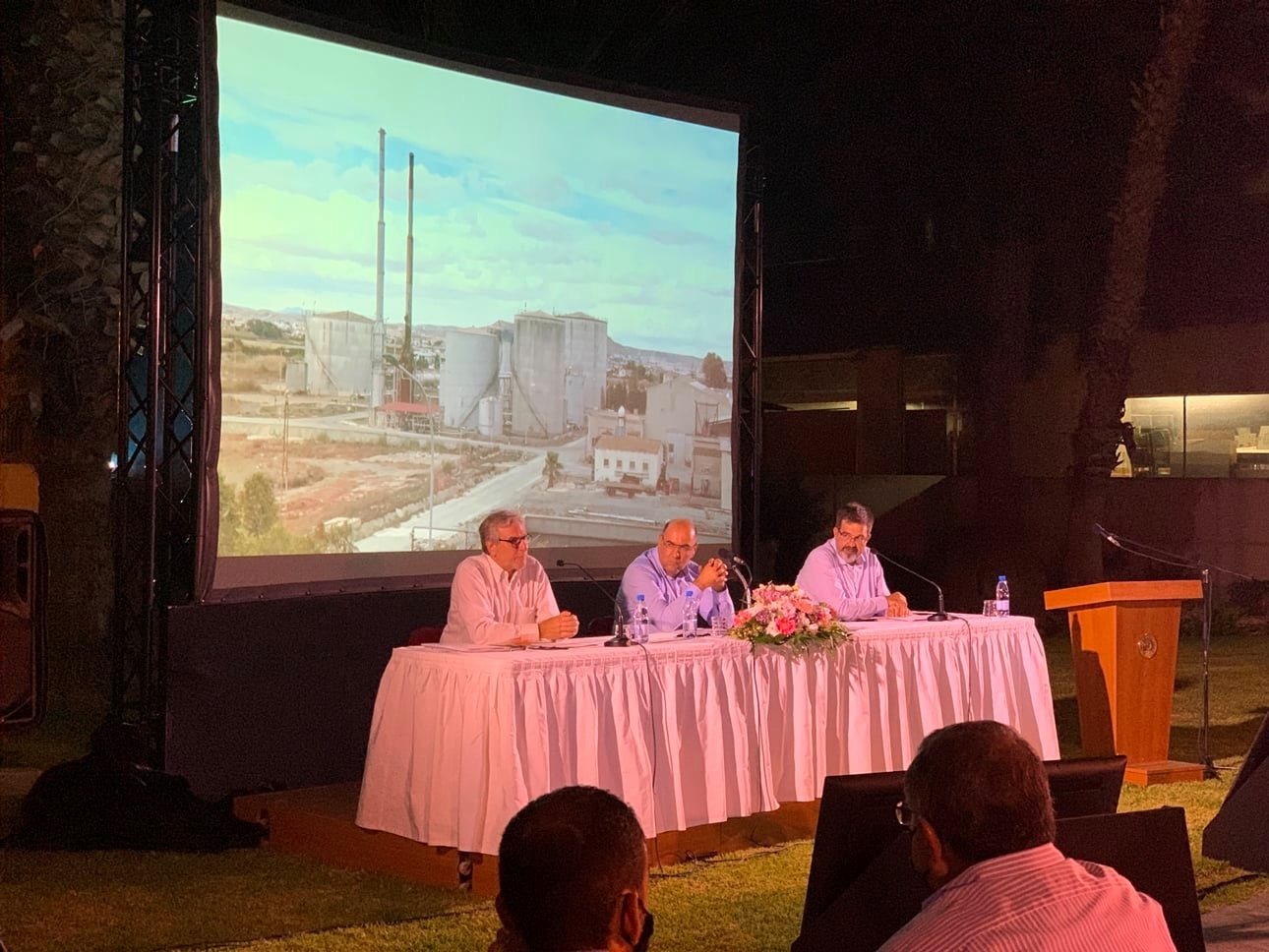 An important development is also the fact that Hellenic Petroleum Company signed a cooperation agreement with VLPG, effectively solving the problems from where the work of ELPE would continue since work has not yet begun to create their own privately owned bases in Vasiliko. It is noted that, during an on-site visit to the site of the new Consortium that took place on Wednesday, July 7, 2021, the Board of Directors of VLPG analyzed the schedules regarding the complete relocation of the LPG facilities. November 2021 was given as the deadline for the closure of operation and transfer of all facilities from Larnaca to Vasiliko. The Municipal Engineer Mr. Andreas Karakastanis, then presented the Area Plan of former Refineries in the urban area of the Municipalities of Larnaca and Livadia.
The Area Plan introduces modern methods of active urban planning such as urban land reclamation, neighborhoods, multifunctionality and promotes sustainability, sustainable mobility and the circular economy under the umbrella of integrated Urban Revitalization that includes environmental, environmental, social, environmental, environmental, social, parameters. 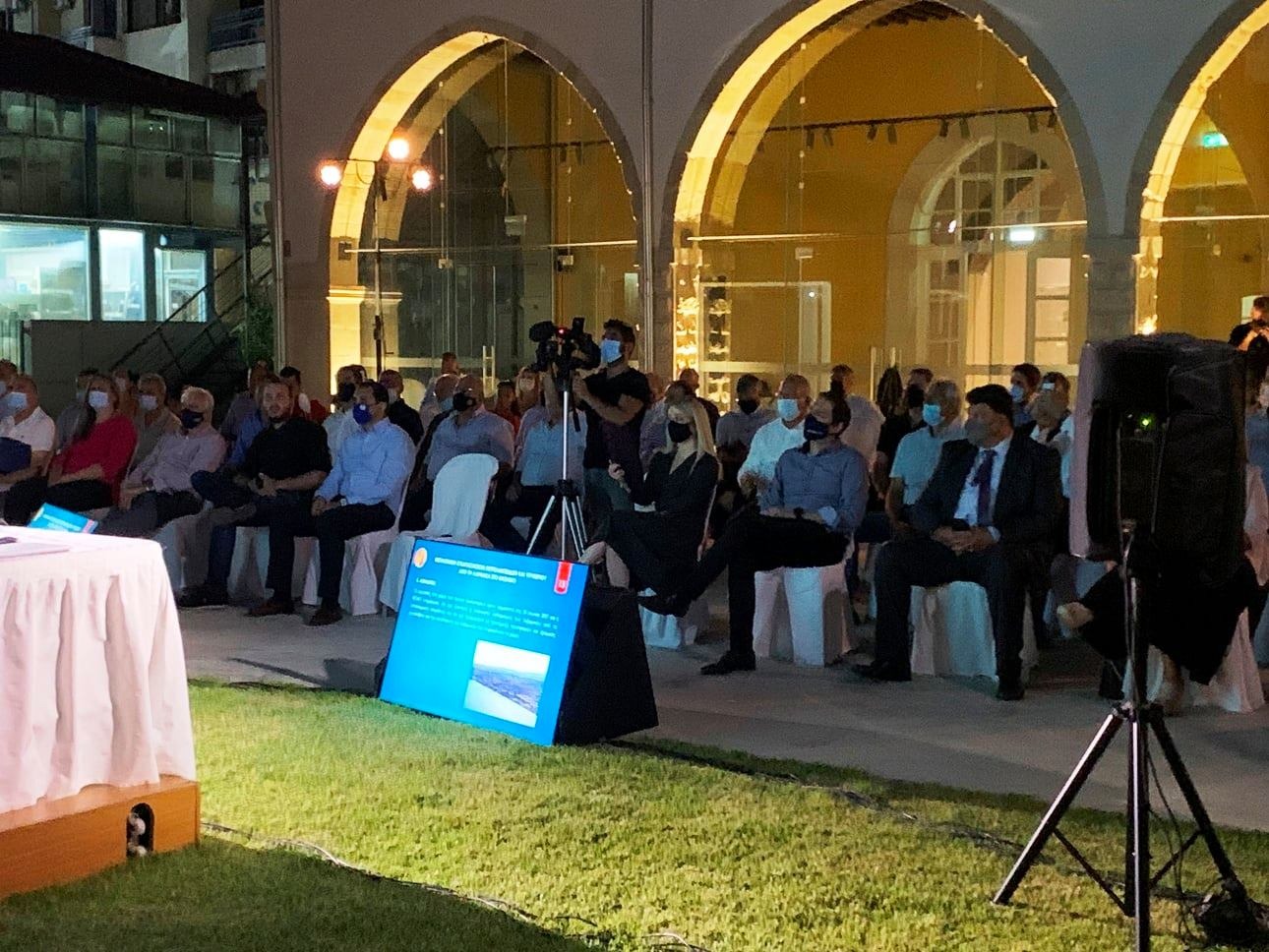 The proposed projects, according to the Plan, are, among others, the creation of an Urban Square on the border of the contact of the Central Multi functional Core with the coastal road Larnaca - Dhekelia, the creation of an embankment in the form of an extensive public linear park along the coast ), the creation of a multi functional / environmental axis on Psiloriti Street, the remodeling of the Archangelos Kamitsis riverbed and all canals, the creation of neighborhoods, a garden city (Arkoleivada) and the completion of the road network. A basic condition and vision is a rejuvenated, clean, friendly to the resident, the employee and the visitor area, which will redefine and strengthen the relationship of the city with the sea, creating a sustainable, healthy, quality, multi functional urban environment, which will be a destination. choice for housing, work and leisure.
The presentations were followed by a discussion and submission of questions and suggestions by the attendees. 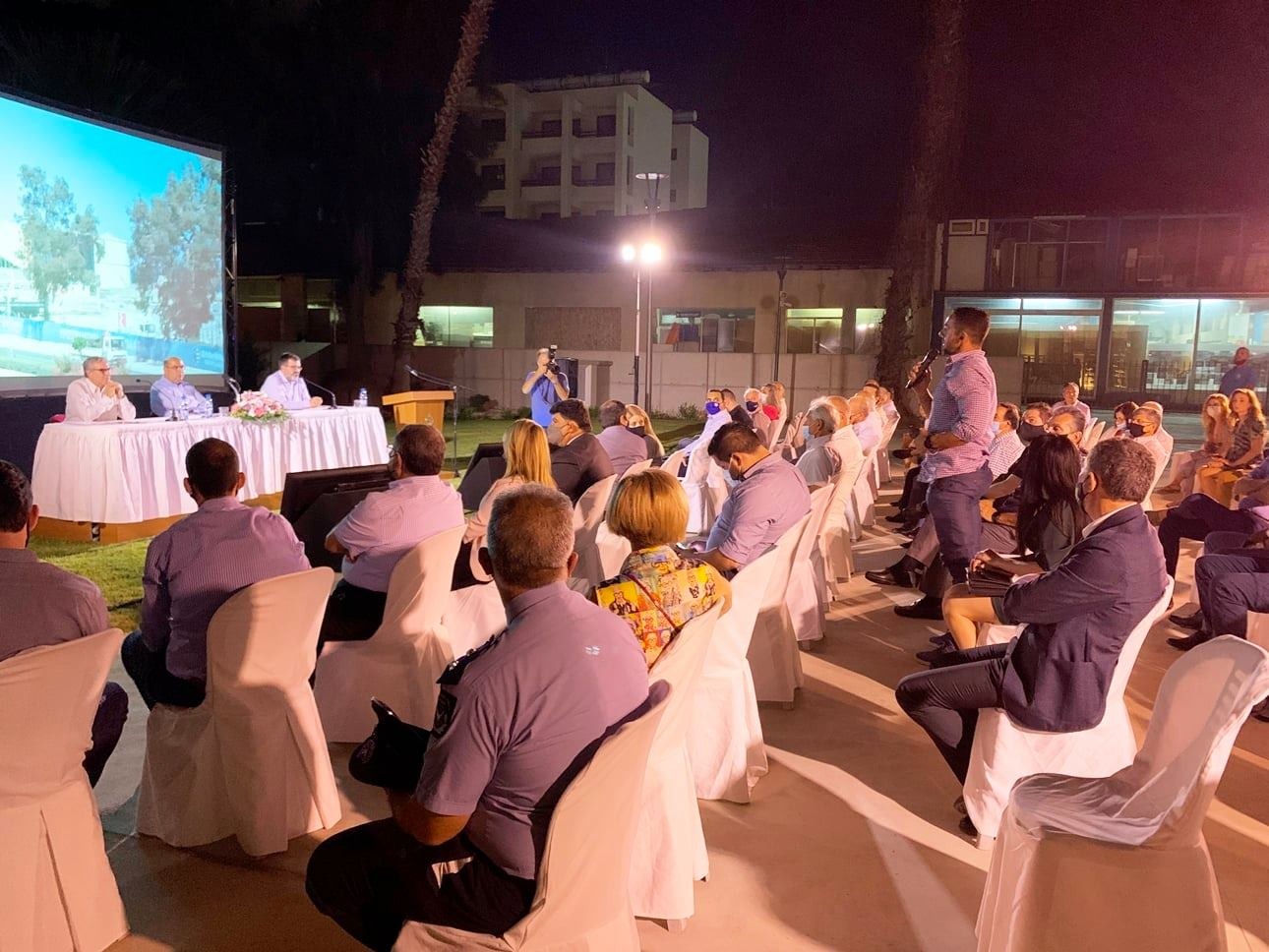 At the end of the event, the Mayor of Larnaca stated that the process of achieving the movement of the oil and gas facilities from the coastal front of Larnaca was difficult, persistent and very complicated. Nevertheless, it has never ceased to be a constant request of the city and the Municipal Council. With the close cooperation and valuable assistance of the Larnaca City and Province Development Committee, the Members of Parliament, the competent Ministries, the competent State Departments and Services, Institutions, the Oil and Gas Companies and especially the citizens of Larnaca, this process is coming to an end with Larnaca now being freed from a serious risk. They have all worked with a common goal, health, safety, and above all the well-being of our citizens and our city.