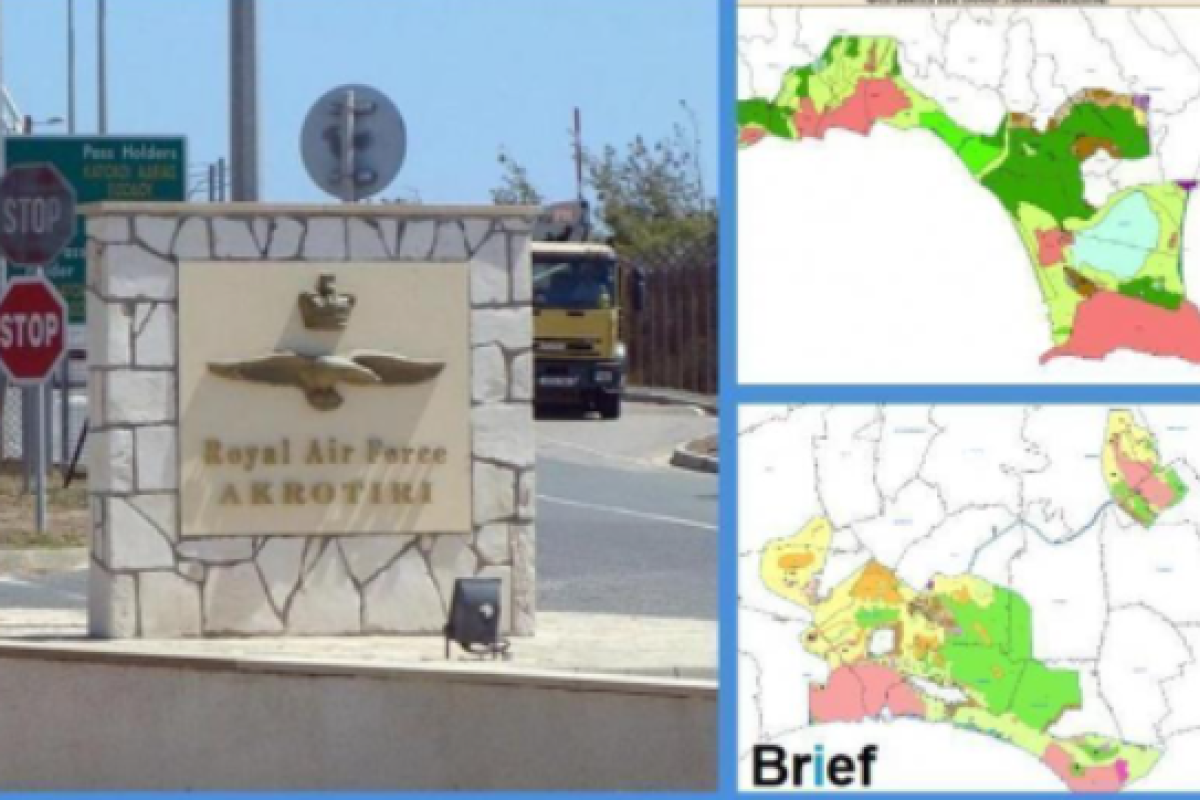 The development of the British Bases will include theme parks, hospitals and schools - All design

The Strategic Environmental Impact Study of the Policy Statement under preparation for the areas of the British Bases in Akrotiri and Dhekelia, was announced today (10/6) by the Department of Environment.

As mentioned, the Commander of the British Bases in a letter dated 5/6/2020, submitted to the Department of Environment of the Ministry of Agriculture, Rural Development and Environment (i) the Strategic Environmental Impact Assessment (SES) of the areas under preparation of the Policy Statement of the British Cape and Dhekelia Bases, (ii) the draft Policy Statement and (iii) the relevant maps, in accordance with the provisions of Chapter 10 (3) of SEA Ordinance 5/2016.

The Strategy, the Policy Statement and the maps are available to the public and can be inspected, between Monday and Friday, from 9.00 am. - 2.00 pm, at the offices of the Department of Environment (28th October 20-22, 2414 Engomi, Nicosia).

It is noted that any person can submit to the Department of Environment, opinions or representations regarding the content of the environmental study (EIA) and/or the effects that may result from the approval of the Plan to the environment, within 35 days from today, at el. mail eia@environment.moa.gov.cy.

It is emphasized that the views/representations will concern the environmental dimensions of the Policy Statement and not urban issues.

Map 1: How the Urban Zones are formed in the area of Dhekelia: 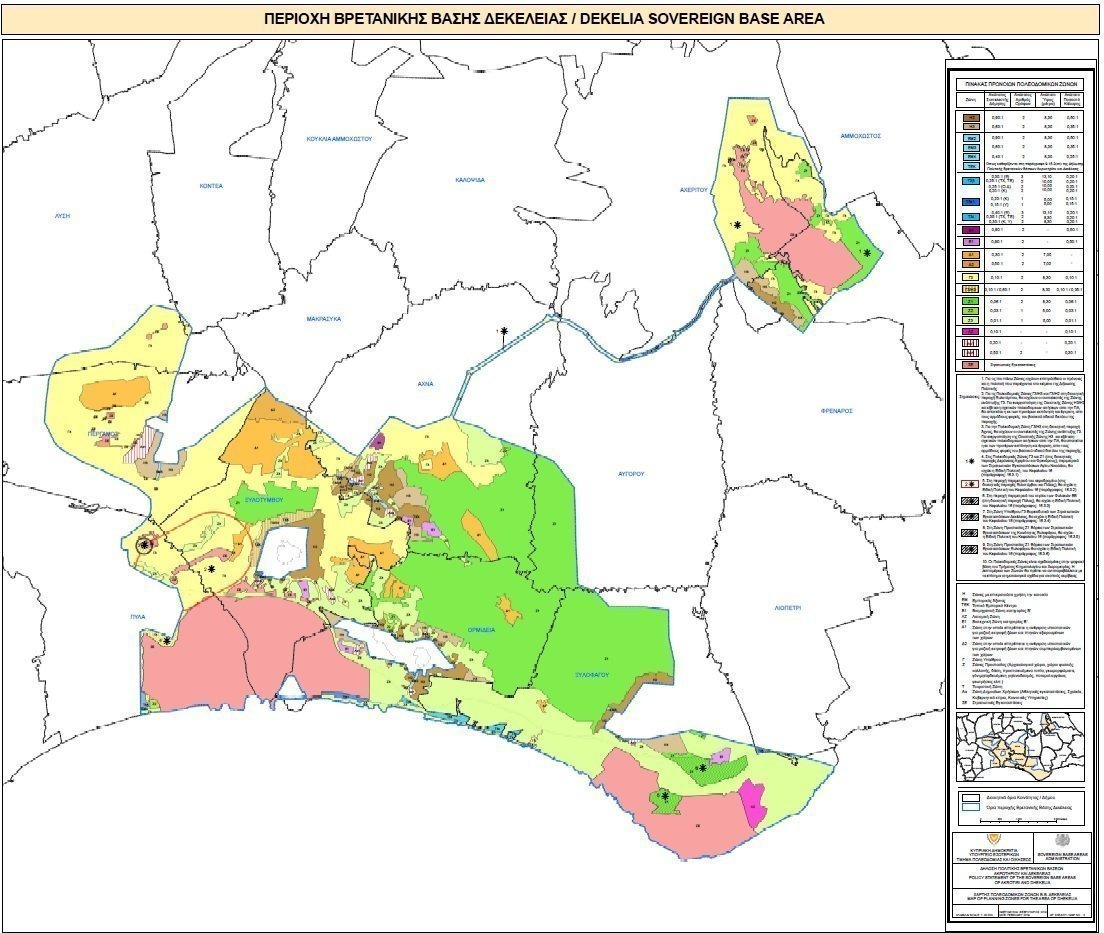 What developments will be allowed
It is worth noting that, as stated yesterday (9/6) by the President of the Republic , Nikos Anastasiadis, the Agreement provides for a significant revision of the property status of properties , with full restoration of the rights of residents and property owners.

1 / A very large percentage of the land within the British Bases is released for development purposes, which is now part of Urban Zones. Specifically, 1800 hectares of land (approximately 860 hectares in the Akrotiri area and another 930 hectares in the Dhekelia area) are included in Development Zones.

3 / In addition to residential, tourism, commercial, industrial and large-scale development, such as:

4 / Apart from defined Development Zones, it is also possible to license under certain conditions and smaller scale developments, such as:

Map 2: How the Urban Zones are formed in the Akrotiri Area: 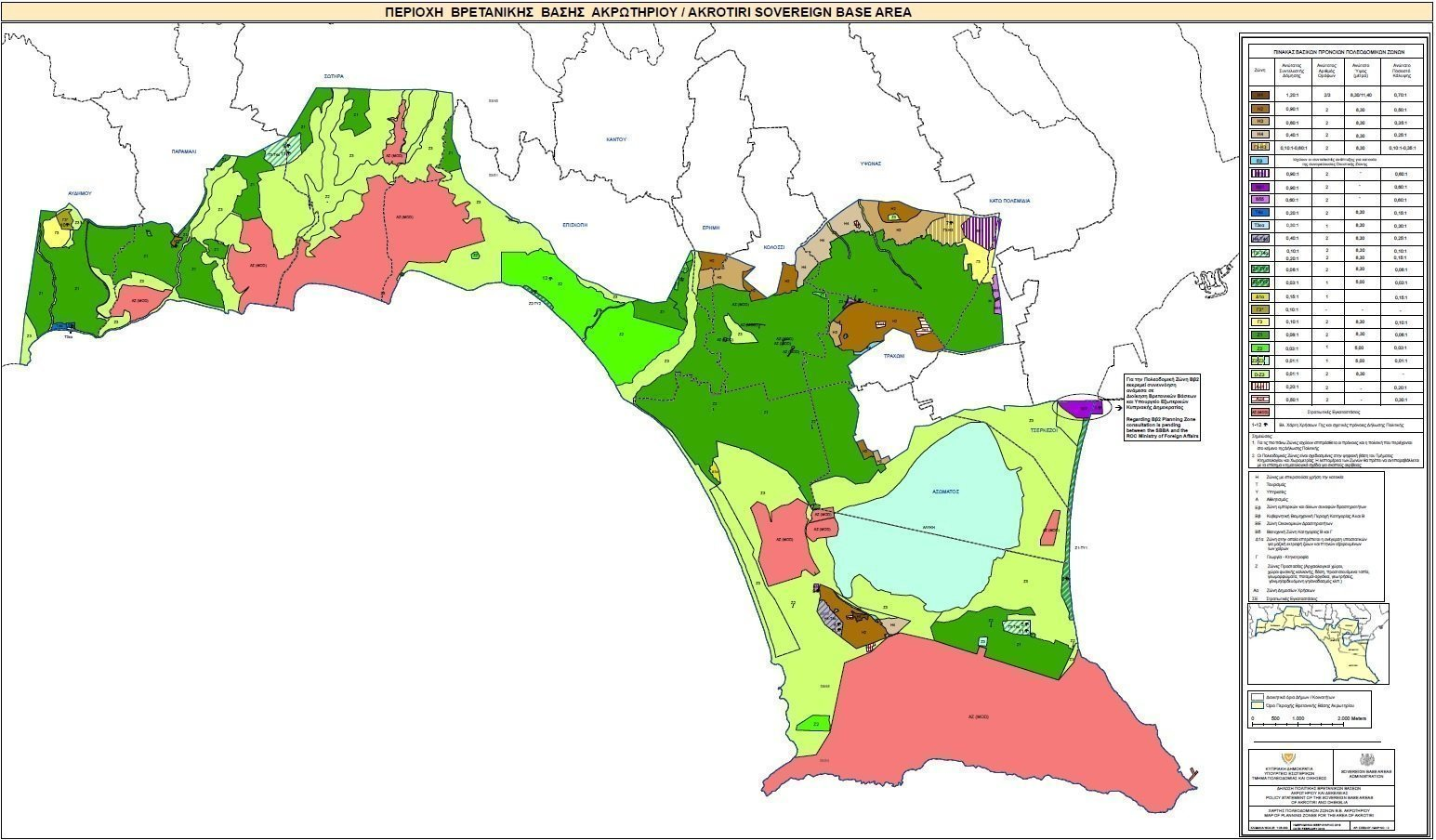 Growth control is necessary to establish acceptable growth for the benefit of local Municipalities / Communities, to the extent permitted, while ensuring that it does not conflict with the political, military, environmental and security requirements of British Bases, in accordance with the relevant provisions. of the 2014 Settlement concerning the regulation of development within the territories of the said British Bases and the Establishment Treaty of the Republic of Cyprus of 1960.

The main objectives in relation to development are: